Green’s The Way to Go

With the current financial crisis and predictions for 2012 looking bleak, you may begin to wonder what the future holds for Cyprus. The state of the world economy is apparent and we too have our own economic issues such as the price of food, electricity & petrol which has soared. Even if you adopt an optimistic outlook, it is fair to say that the state of affairs isn’t good and we know that there is no quick fix. Many complex economic factors come into play so it’s not always possible to change things for the better, certainly in the short term.

Economics aside, what we can begin to do, is look at aspects that we can have some influence over. We can turn our attention towards making positive things happen which will help our country bounce back in the longer term.

Where do we begin? That’s a tough one and as I’m not an economist, I don’t have the answers. But like most people, I have my opinions. We could start by cleaning the place up a bit, for example. Yes, really! There’s one big reason for doing this and that’s tourism.

Tourism is our biggest export. Tourism has suffered in recent years for a number of reasons. Cyprus has become expensive and is therefore not as attractive as it was but there are other factors too which from what I can see relate to the overall holiday experience here. Yes, we have the sun, sea and culture but do these aspects alone give us the edge over competing holiday destinations? Not any more. Attracting tourists is a crucial for boosting our economy so we need to take action.

That’s why I am talking about cleaning up our act; the roads & pavements, the beaches, the parks, countryside and other open areas, shopping areas – you name it. Let’s face it, we don’t have a reputation for being very clean and so many places you come across are badly maintained or scruffy, not to mention all the graffiti everywhere you look. Rubbish seems to be dumped anywhere there’s spare land, cigarette ends litter many pavements and beaches and it’s not uncommon to see people throwing their rubbish out of car windows. We seem to continue turning a blind eye to these goings-on. Isn’t it about time we implemented a zero-tolerance approach on littering, with hefty fines for offenders? 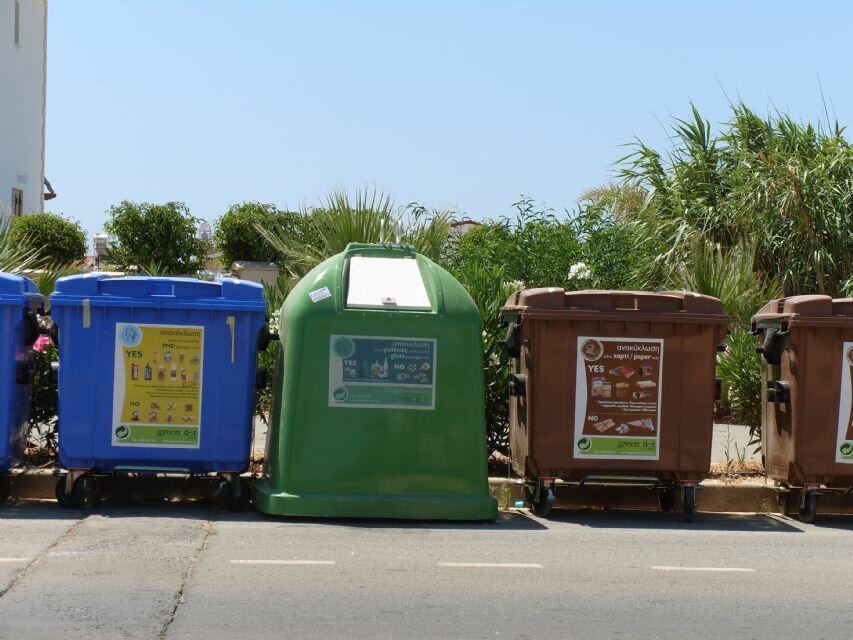 Recycling also needs to play a more important role in the way we deal with our rubbish. Although the authorities here do have a recycling programme, we could do much more, such as installing recycling bins (and lets face it, more refuse bins!) throughout the towns, countryside and beach areas. Obviously cleaning up the environment means more than just cleaning up the streets, but it’s a start. Cleaning up is good for the environment, good for us and good for tourism!

If you need evidence that this is the case, here’s an example. In preparation for hosting the 2012 Olympics, London has installed interactive recycling bins across the capital in a bid to reduce waste. The bins deliver electronic information such as breaking news, transport timetables andadvertisements via an LED screen on the side. By the start of the London 2012 Olympics, they will have 200 installed which will extend their reach to over 3 million people.

It’s not all bad though. Things are beginning to happen. There are some good initiatives currently under way like the Limassol Marina and Nicosia’s application for the 2017 European City of Culture. This in particular is great because it promotes our culture around the world…but it would be far better if, in addition to showing off our culture, we could show everyone how clean and green we are too!

Establishing more venues with an emphasis on nature is important too because these are the kind of things people want to see. Several years ago whilst holidaying in Cancun, Mexico, I visited Xcaret eco theme park. Although it was a theme park, it was not one with all the rides as you might imagine. It was superb because it promoted the flora and fauna of Mexico in an educational and fun way for adults and children alike. I bought the best chemical-free sun lotion ever in one of their souvenir shops because you weren’t allowed to swim in their streams with chemical sunscreens. That’s how strict they were but it was their all-round eco-ethics that made the park memorable! Just goes to show; if you are committed, it works! Visitors want to see the real Cyprus and cleaning up the place will certainly help. It is also worth mentioning that agrotourism is becoming increasingly popular so it makes sense to step up our marketing activities in this area. We already have an agrotourism industry which is ideal for both tourists and residents wanting an eco-break.

While I am by no means imagining that a blanket application of green policies will solve our economic problems, I do believe that adopting greener practices could play a key part in safeguarding the future of the island.

There are lots more ideas that could be put into practice to make for a cleaner and greener Cyprus and I have merely scratched the surface but these are a few steps in the right direction which I believe will definitely have long-term positive repercussions on the country as a whole.