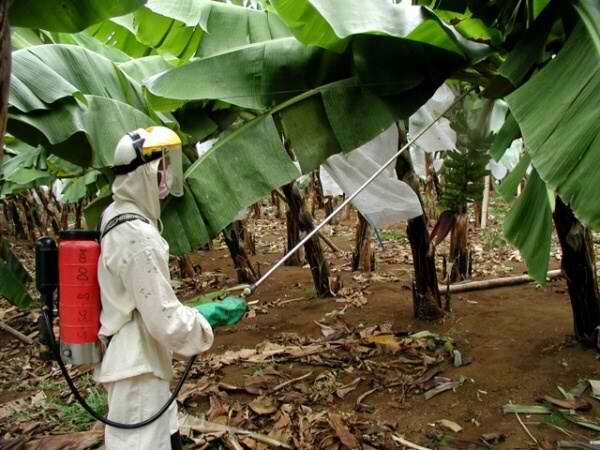 The banana industry is dominated by 5 international companies whose operations are so huge they dwarf the export revenues of all the banana-producing countries combined. The social and environmental cost of producing bananas is huge, and has brought misery to thousands. Indigenous people have been driven out of their lands to make way for new uncontaminated plantations, workers earn as little as US$1 a day in some countries and unionised labour is blacklisted. Worse, thousands of tonnes of toxic pesticides are poured on the plantations often sprayed from planes overhead.

With bananas, it’s the cultivation that’s the problem. When they are grown on a large monocultural scale, big companies looking to maximise profits, are liberal with giving disease-prone banana plants major doses of agrochemicals. In addition, the banana bunches themselves are often wrapped on the tree with pesticide-coated plastic bags for protection. Five of the chemicals used on bananas are classified as ‘extremely hazardous’ by the World Health Organisation and 3 organophosphate pesticides are applied that are not approved for use in the UK. On large plantations, more money is spent by the growers on agrochemicals than workers’ wages.

Green Cyprus advises against buying ‘any old bananas’ – you know the ones that are generally available in the supermarkets and fruit sellers. Instead, opt for the smaller, sweeter variety of Cyprus bananas when they are in season, which are grown on a much smaller scale and are therefore likely to be contaminated with lower levels of agrochemicals. Even better, the health shops sell organic Cyprus bananas too when they are in season! Above all and very importantly, you will be supporting the local economy!