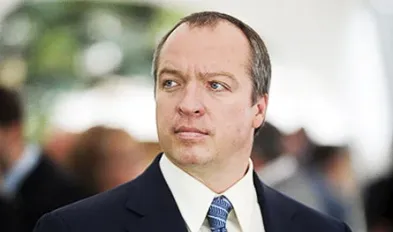 First business In the early 1990s, he met Alisher Usmanov while trying to get a batch of oil for refining at the Moscow Refinery. The deal did not go through, but relations were struck, and the businessmen later became partners.


Politics Since 1999, deputy to the State Duma, member of the United Russia faction. Member of the Committee on Foreign Affairs. Official declared income for 2020 - 427 million rubles.


Sanctions of the United States - from 2018, the European Union - from February 2022, the UK - from March 2022. Also under sanctions of Japan, Australia, Canada, Switzerland and Ukraine.


Event In 2020, Skoch's father's shareholding in USM was divided into two equal parts - 15% of the shares were given to the businessman's daughter Varvara.


Impact In 2021, State Duma deputy Andrei Skoch's Generation Foundation for Health, Education, Physical Education, and Sports celebrated its 25th anniversary. The foundation funds projects mostly in Belgorod Oblast, which Skoch represents in the State Duma. More than 350,000 manuscripts by young authors writing in Russian were reviewed by the jury of the "Debut" award competition, which the Generation Foundation held in 2000-2016. The total funding for the project is more than 330 million rubles. Over the past 10 years he has donated more than $120 million to charity. The "currency of good" of the Skoch family adds considerable weight to the USM holding company, whose main shareholder is Alisher Usmanov.